Yep, another great issue of The Rifter® #54 is done and at the printer. There is a wealth of fun information in this issue. A Heroes Unlimited™ adventure, Palladium Fantasy RPG® monsters and races, the Rifts® city of Chillicothe, a Nightbane story and the final chapter of The Hammer of the Forge, plus news and other good stuff.

Rifts® Dimension Book 14: Thundercloud Galaxy™ is almost finished as well! We plan to get it the printer next week, before the Creators Conference (only one week away!). We'll all be working through the weekend to get it finished and to the printer.

No time for a birthday! Gotta finish Thundercloud Galaxy™ (which is going to be epic) and prep for the Creators Conference (which should be pretty awesome all by itself). This means there just isn't time to celebrate my birthday on Saturday. Okay, I might take the evening off after eight hours at work, but that's it. We'll probably celebrate my birthday with Julius' (his is April 7), sometime after the Creators Conference like April 14th. Wayne is the next birthday boy (May 1), with Kathy, Alex and Thom all in June. Yeah, we're all clustered together.

Back in Print and Ready to Ship: The following out of print books arrived at the Palladium warehouse last week and are ready to ship.
- Rifts® Dimension Book™ 6: Three Galaxies™
- Rifts® Black Vault™
- Rifts® Mercenaries™
- Aliens Unlimited™ – A Heroes Unlimited™ sourcebook

Rifts® Baseball Caps are back due to popular demand and in the warehouse waiting to ship.

Online sales. Sales have been scary bad this week. March and April are often the worst months in sales, especially without a new release. April should pick up with the release of The Rifter® #54and Rifts® Thundercloud Galaxy™, both scheduled to ship next month. And they will be followed in short order by more new releases all Spring and Summer.

Palladium Website. We've all been so busy working on books and other things that none of us here have even checked in with Rex Barkdoll or Thom Bartold in the last week. Sorry guys. I'm hoping it goes live sometime in April.

Join Palladium on Facebook. The Palladium Facebook page continues to be a fun place to visit, chat and have fun and we invite you to join us. More features and interaction are coming. Our new "tech guy," Rex, has other ideas for us as well, so expect to be seeing us all over the Web in the months to come. Social media, watch out!

We're working hard to get books out, so I'm keeping this short. Game on.

Palladium Books will be at Gen Con Indy this Summer – August 4-7, 2011. Please come on over and join the fun. Palladium has not attended Gen Con in a couple of years, so we figured it was time to return. We heard the event was fantastic last year, we'll have a bunch of new product, and it is a chance for us to meet and chat with fans from around the world. Besides, it is Palladium's 30th Anniversary so it seems appropriate to be there.

We hope you will stop by our booth to chat and get autographs, as well as pick up new and back stock titles, specialty items and more. We're not sure who will be joining us at the Palladium booth, but so far, Palladium creators you'll be able to meet include:
- Kevin Siembieda
- Wayne Smith
- Michael Mumah (artist)
- Brandon Aten (writer)
- Matthew Clements (writer; tentative)
- And others to be announced. 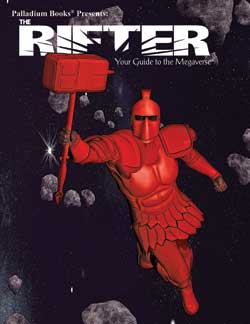 This is another landmark issue of The Rifter® filled with epic source material, exotic places, strange critters, adventure settings, good stories and ideas.

The Rifter® is your doorway to unlimited imagination and numerous Palladium role-playing worlds. It offers new heroes, powers, weapons, magic and adventure for your games. It presents new villains, monsters and dangers to battle, and new ideas to consider.